Sāmī al-Shawwā’s star shone from the beginning of the 20th century until he passed away in 1965.

He gave the violin a distinguished position within the Arabic takht where it had been played like a rabāba until then, and set a complete violin playing system adapted to Arab Music, including techniques and methods that were adopted by the Arab violinists during his lifetime and by those who came after him.

Sāmī al-Shawwā is the only famous musician in the Arab World who earned a place among his peers thanks to his distinctive violin playing. His instrument accompanied the greatest performers, including Sheikh Yūsuf al-Manyalāwī at the beginning of the 20th century, then Umm Kulthūm and Muḥammad ‘Abd al-Wahāb, added to other muṭrib from Bilād al-Shām and Iraq. Having played with the major Iraqi musicians like a true Iraqi, and like a true Kuwaiti with the major Kuwaiti musicians, Sāmī al-Shawwā remains the unrivalled Prince of the Violin in the Arab World.

This book authored by musicians and researchers Ahmad al-Salhi and Mustafa Said depicts with words and images Sāmī al-Shawwā’s fruitful life deduced from his memoirs as well as from the memories of those close to him. Another chapter describes his playing technique. Finally, the book includes a detailed and scientific analysis of a number of Sāmī al-Shawwā’s recordings. Those who wish to listen to these recordings can find them all here.

The recordings analyzed and commented in the book in Arabic Sami al Sawwa the Prince of violin. 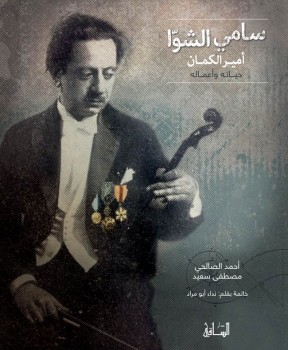 Get it at AMAR.