Born in Cairo, Mustafa Said is a musician, composer, musicologist, oud virtuoso and singer. Mustafa has founded Asil Ensemble for Contemporary Arabic Classical Music in 2003. Mustafa Said is a winner of the Aga Khan Music Awards 2019. He was the director of "AMAR Foundation for Arab Music Archiving & Research", from 2009 to 2022, which is the only organisation in the Arab world that works in audio archiving Arabic music. Mustafa also directed and adapted "Rawdat Al-Balabel" which is a series of podcasts about classical Arabic music sponsored by AMAR and the Sharjah Art Foundation.

Mustafa started music education at a very early age accompanying the “Mashayekh” of Tanta (Egypt) and learning from them the art of Inchad. He made a study trip around the Mediterranean sea and central Asia to study music from different areas, as self-studies and within a world music program at many universities starting with the American University in Cairo, alongside literature and linguistic studies at Ain Shams University. Later he pursued a Master's Degree which was supervised by Nidaa AbuMurad from Antonine University in Lebanon, he focuses his study on the modal system in Mashayekh singing tradition. Mustafa’s major projects and activity is in the field of performing music and composing new melodies. Taught workshops and gave conferences and lectures in many academic and artistic institutions. He also wrote several musical compositions for theater plays, dance performances and documentaries. He has participated in many international music festivals as a solo performer, a guest artist, a collaborator with other musicians, or with the Asil Ensemble (which he founded in 2003).
Four albums were published containing his compositions as well as many articles in academic publications and regular magazines. His Music and essays were recognized in many awards and cretics. 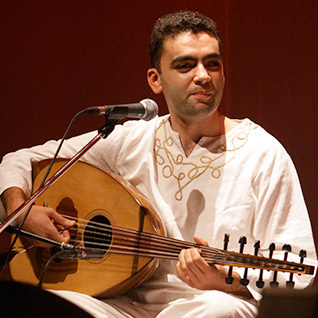